The wastewater treatment plant (WWTP) of Ravenna, Italy has been considered for an upgrade to improve sludge handling capacity, energy recovery and accommodate the population growth in the catchment. The evaluation of adequate upgrade solutions and the decision-making process have been influenced by the limited amount of data available. To fill this gap, our client HERA S.p.A. approached us to develop a model of the WWTP. We devised a solution using WEST to provide the basis for the evaluation of several operation scenarios. The WEST model proved to be a reliable decision-support tool for the utility to identify the most suitable optimisation and upgrade strategies.

Various factors – including low influent organic loading and reduced capacity of sludge treatment – have affected the performance of the Ravenna WWTP. This has resulted in limited energy recovery and high energy consumption due to aeration requirements.

Development, calibration and validation of a WWTP model using WEST, DHI’s modelling software for the dynamic modelling and simulation of WWTPs and other types of water quality related systems. The calibrated and validated WEST model was used to evaluate several scenarios aimed at improving the performance and the efficiency of Ravenna WWTP.

Assessment of scenarios leading to optimised efficiency and costs

Support to decision making and implementation of optimal strategies

‘We chose WEST for its great capabilities in describing biological processes in wastewater treatment systems and its high potential for customisation through the creation of new process models and process units that are not present in the standard library. Furthermore, the intuitive graphical user interface and the ease of importing our own data allowed us to rapidly build complex plant layouts, such as the one of Ravenna WWTP (240,000 PE).’

Operational challenges at Ravenna WWTP
The Ravenna WWTP has faced several challenges that have limited its efficiency. Limited organic (COD, BOD) loading in the influent has affected the denitrification performance. Furthermore, reduced capacity and operation of sludge thickening and anaerobic digestion have been handled through waste sludge recirculation and pre-thickening in primary settlers as well as operation of activated sludge reactors at high solids concentration (up to 15 g/L). This operational strategy has resulted in limited energy recovery and high energy consumption through aeration.

Besides the implementation of more efficient aerators, the identification of suitable optimised solutions has been influenced by the limited availability of measurements. A preliminary evaluation was made to define – also through additional monitoring – a key data set describing the operation of the WWTP.


(Hover over the image to zoom)


A model of the Ravenna WWTP was set up in WEST, reproducing the complexity of the existing layout and the operational strategy. As a result of limited aeration efficiency, simultaneous nitrification-denitrification was simulated inside oxygen diffusion-limited flocs. A dynamic influent fractionation model was considered to account for variability of measurements in raw sewage.

A stepwise, long-term (1-year) calibration of the WEST model against selected measurements was used under dynamic conditions. Following the initial estimation of fractionation parameters, incremental complexity was included in the model (waste sludge dynamics, secondary settler model, temperature dynamics) to describe WWTP operation. Minor adjustments of operational settings and biokinetic parameters were required, yielding a satisfactory fit of the model output to the available data.

Further validation of the model was performed against data from a dedicated sampling campaign, hence confirming the approach and parameter set used. 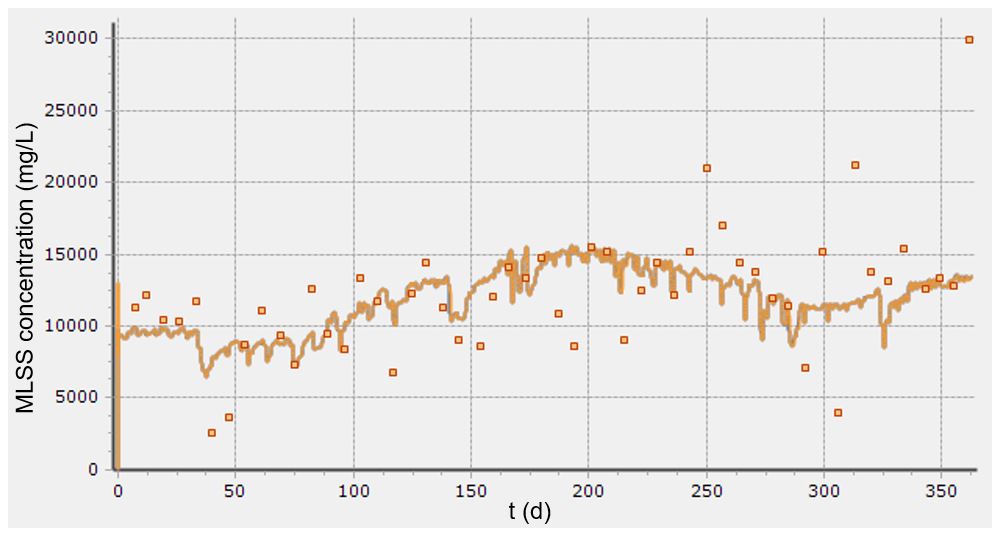 
Scenario analysis
The calibrated and validated WEST model was used to evaluate several scenarios that would improve the performance and efficiency of Ravenna WWTP.

It can therefore be concluded that the upgrade of sludge treatment (providing for improved energy efficiency) should be coupled with an appropriate strategy that ensures good effluent quality. The implementation of DO control proves especially useful in this context, as it also provides for an optimised energy consumption for aeration.


The development of a reliable model of Ravenna WWTP resulted in a decision-support tool for the project engineers to execute informed decisions regarding the upgrade of the facility.

The analysis of selected upgrade scenarios revealed the potential for significant improvements in terms of performance and energy efficiency. Multiple objectives were considered in the evaluation, i.e. effluent compliance, energy consumption and recovery.

Founded in 2002, Hera S.p.A. provides gas, electricity, water cycle, environmental, and other services in Italy. The company engages in the provision of integrated water services, including the collection, treatment, distribution, and purification of water; and design, construction, operation, routine and unscheduled maintenance of sewerage networks and wastewater treatment plants.

Want to take the next step in solving your challenge?

Do you have challenges? Then get in touch with our experts right here!

You need to accept all cookies before submitting this form! Questions? Reach us at info@dhigroup.com or +45 4516 9200.