Developing a calibrated integrated hydrological model of the Hinds/Hekeao catchment

A Māori philosophy that reflects environmental and resource management – ‘Ki uta ki tai’, translated as ‘from the mountain to the sea’ – encompasses stewardship as a holistic approach.
Our client, Environment Canterbury, needed a realistic management tool to support them in policy planning. To achieve this, we introduced a coupled ground- and surface water integrated hydrological model. The adopted management approaches would help offset groundwater level and surface water flow declines and meet the economic and environmental needs of the water resource. The client was also looking to increase their in-house modelling capacity along the way.

The client had two objectives: the first was to look for a scientifically-robust and integrated catchment tool, which they could use for modelling groundwater and surface water, as well as the effects of land-use change on hydrological resources of their region.

The second was to build internal integrated modelling capacity within the Regional Council. Having scientists and engineers gain experience and skills while building the integrated models meant the models took longer to complete – but this also meant that they would not have to outsource in the future, which is an enormous benefit.

In partnership with DHI, Environment Canterbury developed a calibrated integrated hydrological model of the Hinds/Hekeao catchment using MIKE SHE to support plan hearings. The fully distributed nature of MIKE SHE allowed for a physical representation of all model parameters at a specified grid cell resolution.

MIKE SHE can simulate the entire land phase of the hydrologic cycle and allows components to be used independently and customised to local needs.

After the project, the client gained a robust model that could be used to support local authority hearings

An internal technical team made up of water scientists, ecologists and numerical modellers was established

‘We used the robust integrated model to validate previous works and this supported us in the Resource Management Act hearings. For capacity building, we now have modellers of the future who understand the fundamental premise of modelling. It’s definitely a positive offshoot.’

Changing irrigation practices, over-abstraction of groundwater and piping of irrigation and stock-water distribution races had contributed to declining groundwater levels on the Canterbury Plains in the Hinds/Hekeao catchment.

Apart from a sophisticated tool for modelling groundwater and surface water, Environment Canterbury was also looking to build capacity in their organisation so that they would not have to outsource in the future. 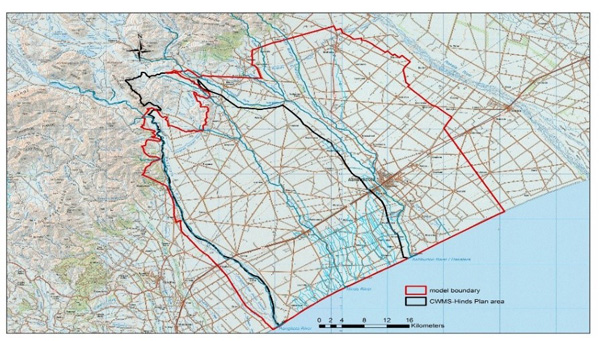 Bounded by the Rangitata River to the south and the Ashburton River to the north, the Hinds Plains sub-regional catchment covers an area of approximately 1375 km2 © ECAN/DHI

Historically a vast wetland, the farming practices in the Hinds River/Hekeao catchment have changed the catchment significantly. In recent years, modified irrigation methods had led to increased groundwater use and increased application efficiency from surface water-sourced irrigation schemes. There were areas that the groundwater and surface-water were so interconnected they were unable to be modelled separately, which led our client to seek out a way to couple the modelling. After surveying the market, MIKE SHE was determined to be the best tool for integrated modelling.

Addressing the entire hydrological resource, there was a focus on setting limits for both quality and quantity for the groundwater and surface water resources. To address this and to support a limit setting process, Environment Canterbury established a Hinds Plains Technical Team that includes water quantity and water quality scientists, ecologists, and numerical modellers.

We implemented the solution using MIKE SHE, a flexible modelling framework that includes a range of numerical methods for each hydrological process. It has an advanced, conceptual, model-independent user interface with full water balance accounting for all hydrological processes.

MIKE SHE can be used for the analysis, planning and management of a wide range of water resources and environmental problems related to surface water and groundwater. It is especially helpful in determining surface-water impact from groundwater withdrawal and conjunctive use of groundwater and surface water, which was instrumental in achieving the goals set for Environment Canterbury.


As the application of choice, it was selected to quantitatively assess resource management options and ultimately aid in establishing best catchment management.


Specifically, it was used for simulating the relative change between land use scenarios, rivers and lowland stream flows, irrigation demand and application efficiency as well as groundwater levels in a range of deep and shallow wells across the catchment.

MIKE SHE allowed for:

Surface water near the Lynnford Hall in the Hinds/Hekeao catchment, © DHI

Effective management of the water resources of the Hinds/Hekeao catchment was dependent on a detailed understanding of the biophysical processes. Following the project completion, the client gained a robust model that could be used to support local authority hearings.

The client was able to create a coupled groundwater/surface-water model that simulated groundwater inputs into coastal streams, a fully spatially distributed grid to allow modelling of relative change between land use scenarios and a model sensitive enough to show the expected differences between various land management scenarios.

Critically, the model was used to show that Managed Aquifer Recharge could be used within the Hinds/Hekeao catchment to remediate groundwater declines and improve spring-fed stream flows.

The modelling showed that one of the primary drivers for the increased seasonal water level fluctuations seen in recent years was groundwater pumping. The modelling work undertaken suggested that the declining groundwater levels and consequently declining spring-fed waterway flows were heavily influenced by the:

Environment Canterbury is New Zealand’s geographically largest regional authority situated in the middle of the South Island, in the Canterbury region of New Zealand, to the East. They work in partnership with the communities of Canterbury to promote the sustainable development and management of the regional natural resources.

Want to take the next step in solving your challenge?

Do you have challenges? Then get in touch with our experts right here!

You need to accept all cookies before submitting this form! Questions? Reach us at info@dhigroup.com or +45 4516 9200.